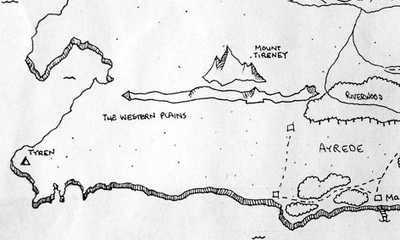 The Tyren are humanoids populating the land west of Ayrede. Brian Westhouse refers to them as both "trolls" and "goblins", both of which go some way to describing their appearance. The term Tyren is also applied to the land controlled by the Tyren, as well as their capital city and possibly their native language.

Crow mentions a possible Ayrede slang term for them - "it's not tyrocks, it's the Tyren" - which hints at the long-standing animosity Marcurians have for them. The Tyren have for generations wished to take possession of Marcuria, partly because of Marcuria's aggressive military policy in the past, and partly because the city is now peaceful and enriched by busy trade routes.

At the time of The Longest Journey, the Tyren are allied with the Vanguard, further straining their relations with the Marcurians who are guided by the Sentinel's teachings. Vestrum Tobias mentions they have been whipped into a religious fervour by the Vanguard to spur them into a 'holy war', but we know little of the Tyren's religious sensibilities.

However, they have a particular interest in the Stone Disk. In the past, Tyren soldiers, alongside Sentinel traitors, attempted to steal the Disk but were thwarted by the Mother herself. More recently, the Tyren ambassador has been asking questions about the Disk in the Ayrede Council chambers. 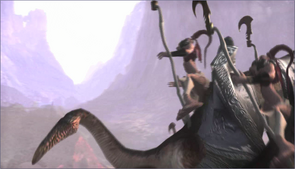 The Tyren were involved in the pursuit of April Ryan through Arcadia. Their pursuit is hindered, however, when she takes to the sea, as the Tyren care little for water and have no navy. At the end of TLJ they have invaded Marcuria, with the Chaos Vortex at the lead. Unfortunately they make fickle allies and might in fact function more as mercenaries: as Cortez says, "Those beasts are not much for loyalty, but promise them money and power - the Vanguard have probably offered them half of the Northlands, perhaps even Marcuria itself for their services."

Crow comments that he doesn't fancy the idea of living under Tyren rule, because the language of those 'barbarians' sounds like "arrrgh, rarr, raaagggh - not particularly refined." Ironically, the term 'barbarian' was coined by the ancient Greeks as a slur on their Persian invaders, because to them the Persian language sounded like "bah, bah, bah".

The last conflict of Ayrede with the Tyren long ago was commemorated in Marcuria by a large grove of trees.

In Dreamfall, it is revealed that the Tyren invasion of Marcuria was successful, and they actually occupied the city for a short time. However, the arrival of the Azadi took them completely by surprise. With their Cloudships, technology and religious fervor, the Azadi drove the Tyren out the same year they invaded. They were not satisfied with the mere removal of the Tyren, though - they hunted them down, and now there are only scattered numbers of the Tyren left in the Northlands.

Retrieved from "https://tlj.fandom.com/wiki/Tyren?oldid=13469"
Community content is available under CC-BY-SA unless otherwise noted.