Stark is the scientific half of the twin worlds and effectively the world we know today. In 2209, the civilization of Stark is highly advanced technologically and has reached beyond the grip of the Earth's gravity well to the surrounding solar system, and to star systems beyond. 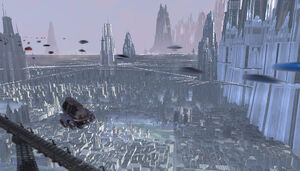 Stark is a place driven by commerce, corporate power, and rapid growth, with a sharp divide between the rich and poor. The quintessential Stark environment is Newport, a city with varying environments including the opulent Grendel Avenue, run-down Hope Street and the student-orientated Venice. While Stark offers wealth and power to those willing to seize it, and all the wonders technology can bring, it also brings risks, such as Rapture addiction or virtual indentured slavery as a colonist. However, for people like April Ryan and her friends, walking the middle ground can lead to a fulfilling life.

There is some commerce between Stark and Arcadia, mainly in the form of dreams or visions of a fantastical world. These become more pronounced when the Balance is unstable. Stark has also been the birthplace of Shifters like April and Adrian, and home for two of the Draic Kin.

Just after the end of April's journey in 2209, Stark suffered through the Collapse, which brought down many major corporations and rendered many technological advances useless. However, mankind has adapted and life is not greatly changed. The most notable change is that space travel has now apparently become impossible and that the interstellar colonies have had their contact with Earth severed. This means that humanity is now reliant on Earth's resources and on each other. Vactrax and Scramjet networks now crisscross the planet, linking people physically, while the Wire links anything with a microchip to everything else.

Possibly due to the Balance's new stability, awareness of Arcadia seems to have faded. However, people are too busy coping with the aftermath of the Collapse and the emerging problem of the Static to pay much attention to dreams... though one company certainly is. Stark's technology is also becoming more biologically orientated, with the growth of biotech industries and organic computers.

Dreamfall Chapters promises to take us new places in Stark, including a visit to Europolis.

April can ask the Map Merchant and Cups Handler about Stark before she learns of it.

Retrieved from "https://tlj.fandom.com/wiki/Stark?oldid=14430"
Community content is available under CC-BY-SA unless otherwise noted.