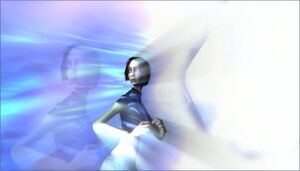 A Shift is a portal, rift or opening of sorts between worlds. The first Shift we saw was an eerie but beautiful portal that looked almost organic (and which sent April to Marcuria upside down). The Shifts since have been something like very bright patches of blue light in midair. When April first opened a Shift using her artistic talents, it appeared as a rippling effect over her painting that finally became a doorway.

Not a lot is known about the nature of Shifts and Shifting, but the general consensus is that it involves having a strong imagination, giving you an ability to reach the world of dreams in a waking state and pass through it to your destination. It is also possible make shifting impossible by means of wards, such as those placed on the House of All Worlds in order to prevent Saga from leaving.

A Shifter is, as described by Vestrum Tobias Grensret, "Someone capable of opening doors between worlds, a Shift, a portal between the realms of Stark and Arcadia. Only a Shifter's own power can allow her to travel. No one else can do this for her."

Shifters often start to demonstrate their powers while they're dreaming. However they can get help from a powerful being, such as one of the Draic Kin, to channel their talent and open a Shift while awake. Lady Alvane has also demonstrated this ability to help, to a slightly lesser degree, though she appears well-informed about Shifting too.

Seems like Shifters passively warp reality around them, especially where they stay a lot - when Divide started to fail separating worlds, first leaks occured at April's home (Fiona and Mickey and possibly April brief travel to unknown forest) and work (sudden appearance of Banda), where she was spending most part of her time and was most emotionally attached.

Jacob McAllen also shows April glass tubes in his office and laboratory where he claims to be breeding 'Warrior Shifters' who will eventually serve him. How they were created and what happened to them after McAllen's disappearance is unknown.

In Dreamfall, April tells the reborn White Dragon that she has 'lost' the ability to Shift (or 'Travel' as Na'ane and Chawan put it). The White of the Kin tells her it's not something she can 'lose,' but that she may have forgotten (an apparent psychological block probably caused by her fear of returning to Stark.) As Cortez once did, the White Dragon is able to channel April's own abilities to open a Shift. While it is now possible to Shift directly to the Guardian's Realm, the White also claims that April cannot Shift without Crow going with her , coinciding with the White's statement that "everything has changed, and everything is still changing."

In her discussion with Zoë Castillo, thinking she was a Shifter, April explains that Shifting, once learned, is "like blinking, with your mind."

Retrieved from "https://tlj.fandom.com/wiki/Shift?oldid=14366"
Community content is available under CC-BY-SA unless otherwise noted.