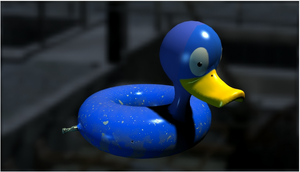 A bright blue inflatable rubber duck. It also appears to be an innertube designed for children.

April sees the ducky trapped under a rusty grill in the Venice canals, and frees by scattering crumbs so a seagull will peck a hole in it. Once freed, the duck floats down to the Fringe Cafe and gets snagged.

When April retrieves it, she finds that someone has mysteriously put a Band-aid over the hole in the duck. She uses the ducky as part of a complicated apparatus to retrieve a key from the Metro Line. This is one of, if not the most famous (and hated) of TLJ's puzzles.

Obtained from the canal that runs below April's window.

Zoë finds some unexpected evidence of the ducky in Europolis when she encounters a notice posted on a wall that the ducky has been found.