Dreamfall Chapters is the third game of The Longest Journey Saga and the second (and final) of the "Dreamer cycle". It is a direct sequel to Dreamfall. The first part of the game, Book One: Reborn, was released on the 21st October 2014. The last part, Book Five: Redux, was released on June 17th, 2016. 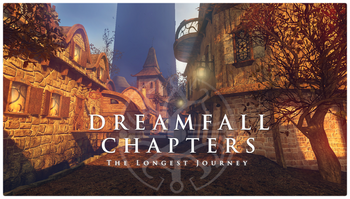 Ragnar confirmed that the story began where Dreamfall ended as well as rewinding to show some Dreamfall events from a different perspective, and that the story followed multiple characters, "both old and new, and there will be more overlapping paths and storylines".

The game is divided into 13 chapters and 5 books. Each book has its own self-contained story arc with a beginning, middle and end.

Dreamfall Chapters follows Zoë Castillo and Kian Alvane. At the beginning of the game, Zoë is still in the Storytime where she was at the end of Dreamfall, and is helping people to overcome their nightmares. She then wakes up from her year-long coma and moves to Europolis, where she gets involved in the upcoming election. She also takes up one of two possible career paths, chosen by the player. Meanwhile, Kian escapes from Friar's Keep, where he was imprisoned, with the help of Balsay Bachim, who wants him to participate in the Marcurian resistance movement.

According to Ragnar the game features all of the main characters of the TLJ "saga". April Ryan's storyline is developed and even includes events set at various parts of the timeline, between the events of The Longest Journey and Dreamfall, before and after.[2]

An early post on Ragnar's blog gave the following hint:[3]

The following paragraph contains two and a half falsehoods. Make of that what you want: Zoë’s in it. And Crow. Gabriel gets his groove on. There will be puzzles. And an exciting story. You’ll find out more about the Azadi. A Dragon strips down to the ‘bare essentials’ (if you know what I mean). And you’ll learn the true identity of the Prophet.

Category Dreamfall Chapters Characters should list all characters that occur in the game. Below are some of the more notable ones.

The game-play is very much like Dreamfall's, but with a replacement for the focus field. While there was meant to be a revamped combat system, combat was abandoned as a gameplay element. An early prototype of the gameplay was showed at Rezzed 2013 in a Developer Session. Ragnar expressed an early desire to see the game released on a range of platforms, including Mac, XBL, PSN and the Wii Store if feasible.[14] As the first stretch goal of the Kickstarter was met, Dreamfall Chapter was released on PC, Mac and Linux. The Final Cut was released on PS4 and/or Xbox One (they even looked at the Wii U).[15]

Of the three playable characters, Zoë and Kian were announced early on. Ragnar also teased a third, female character [16] thus far unknown.[17] The third character was not be revealed until the release of the game.[18]

We will be researching an online-only continuation of the epic 'Longest Journey' saga, and we very much look forward to develop new chapters to the Dreamfall gaming community - Trond Arne Aas, Funcom CEO

On the 1st of March, 2007 Funcom announced that they had received funding from the Norwegian Film Fund (who partly funded the production of Dreamfall) to partially finance research and initial development for the episodic Dreamfall Chapters, a continuation of DF's story. Funcom decided to use this money to investigate online-only delivery methods of episodic content, mostly in an attempt to circumvent illegal copying and distribution.[19] While this initially proved quite controversial in the TLJ community, expectations gradually faded as production on Age of Conan began in earnest.

Erling Ellingson confirmed that, while AoC was in production, DF Chapters was on hold, but might be taken up again after its release.[20] When AoC was released development of TSW ramped up to full speed, and fans knew DF Chapters would be delayed until at least after the launch of that. Ragnar estimated the development time for DF Chapters as approximately 18 months.[21] After the launch of TSW in April 2012 rumours of a return to DF Chapters resurfaced every so often.

It was not until the 1st of November, 2012 that Funcom reported Ragnar had left to form Red Thread Games for the purpose of creating DF Chapters.[22] Funcom retains the IP for the TLJ series, but Red Thread are licenced to create DF Chapters "and other titles in that universe as well".[23] The Norwegian Film Fund have again provided seed funding to create a prototype[24], but the team also launched a Kickstarter to raise US$850,000 on the 8th of February, 2013. Ragnar stated that, while the budget for TLJ was ca. US$3million and DF US$5-6million, DFC will be somewhere over US$1million, with Red Thread members investing themselves[25]. Red Thread have also partnered with Blink Studios, which was itself formed from TLJ and DF veterans[26].

Ragnar has said that fans will be kept up to date with production, not least because funding will come largely from Kickstarter where investors are regularly updated on progress. Further announcements were promised over late 2012, with work on the prototype beginning before a further reveal in early 2013.[27] It is slated for release in November 2014.[28]

On June 27th 2014, Ragnar wrote a message to backers explaining that the team had decided to return to the episodic structure that they had originally planned for the game, releasing each of the five books separately[29]. It was then planned for all 5 books to be released by September, 2015 on GOG, Humble Store and Steam.[30] On June 17th 2016, the development of Chapters was over with the release of Book 5: Redux.

Concept of Ge'en by Ragnar. 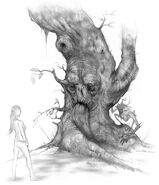 Zoë, a "tree spirit" and a Stickman walk into a bar... 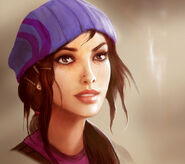 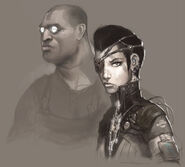 Zoë Castillo in the hospital room 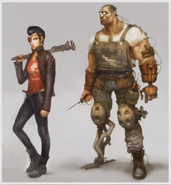