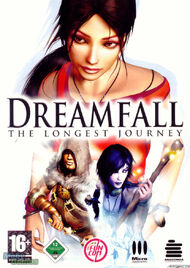 Dreamfall - the second game of The Longest Journey Saga and the first of the "Dreamer cycle" - departed from the point-and-click interface of traditional adventure games like its predecessor The Longest Journey, and was termed a 3D action adventure by Funcom, using German developer Spinor's Shark3D graphics engine. Localized versions of the game for PC and XBox were released slowly over the course of the second and third quarters of 2006. The North American distributor of the both versions is Aspyr Media.

Additionally, Funcom produced Norwegian and English versions of a limited edition of the game for PC, with alternate packaging, an EP containing the four tracks from Norwegian artist Magnet and an artbook. (The orchestral soundtrack was later released separately.)

Dreamfall was described as a "spiritual successor" to The Longest Journey rather than a straight sequel; though it addresses similar themes and revisits some of of the original characters, it has a notably darker tone and more of a 'thriller'-style story. Set in 2219, ten years after April Ryan's journey, Dreamfall follows Zoë Castillo's search for her ex-boyfriend, as it draws her into a larger conspiracy orchestrated by the powerful tech company WATI. In Arcadia, meanwhile, April is trying to find her place in life while opposing the occupying Azadi, while a committed Azadi Apostle, Kian Alvane, finds his faith shaken when he sees the actions of his people in Marcuria. Dreamfall uses not only adventure but stealth and combat elements as well.

Given the circumstances at the end of Dreamfall, there was much speculation about a sequel. According to comments by Tornquist, Dreamfall was planned as part of a larger arc, which is in turn part of the TLJ saga. It was announced on the 1st of March, 2007 that seed funding had been invested in the episodic Dreamfall Chapters, although this was then shelved while Funcom worked on The Secret World. It was subsequently announced on the 1st of November, 2012 that Ragnar had left Funcom to form Red Thread Games for the purpose of making Dreamfall Chapters, with a projected release date of 2014.

"We're extremely happy to announce that hell has indeed frozen over, and that preproduction has finally begun on the second chapter in The Longest Journey saga!"

With this announcement on the 27th of April, 2003, Funcom put joy into many a gamer's heart as they finally announced the follow-up to 1999's adventure hit The Longest Journey. The seeds of this game had been planted much earlier, however.

Soon after the launch of TLJ, Ragnar committed his thoughts about a sequel to paper. "While I didn’t want to jump right into a sequel - certainly not a sequel starring April Ryan on a quest to save the Balance [...] I wanted to get my ideas for the continuation of the story down on paper before they had faded from memory. " He would continue to be anxious to distinguish the game from the normal connotations of a sequel, preferring instead the term "spiritual successor".

The embittered April players encountered in Dreamfall was already decided at this early juncture:

"It was always my intention to have her marked by the years she spent in the wilderness, damaged by the events in the first game, and embittered by her many sacrifices. Her journey was already decided, and had been set in motion by the climax to the first story, and there was no going back. The same went for other key characters in the universe, like Brian Westhouse, Crow, and Cortez."

Ragnar's first real imagining of the game that would become Dreamfall came a year or so later. "Conceived in mid-2001, code-named Unification - and then, later, Static//The Longest Journey - this was the meta-story taken to its (il)logical extreme: a story about a story about stories and dreams and the power of imagination.

"Unification featured a 16-year old Asian-American protagonist named Mica who went on a search to find her missing boyfriend, and a large corporation manufacturing a powerful and mysterious device linked to dreams." Mica was obviously an earlier conception of the 20 year-old Zoë Castillo who, if Helena Chang is indeed her mother, is herself Eurasian.

Ragnar was to write several proposals for a follow-up to TLJ, including a brief dalliance with an MMO called The War of the Balance. These dealt with the "main saga" of TLJ (presumably concerning the end of the Balance) to greater or lesser degrees, but all centred on the idea of April's disappearance. In connection with this, one of the early pitches read: "The dreamer is lost. The dreaming is close. The dream will devour us all unless the dreamer is found." This implies that April was the "dreamer", and the "dreaming" and/or "dream" were what would become the Undreaming.

Another central idea to all these proposals was the idea of a new, female protagonist. In one of these versions the player took control of the protagonist over various periods of her life: as a child and teenager, as an adult, and in old age. "Conceptually, this was intriguing, but it was a bit esoteric, and it would have been difficult to pull off well."

In early 2003 Ragnar submitted two pitches for the second and third installments of the TLJ saga: The Longest Journey: Journey’s Crossing and The Longest Journey: Journey’s End. Journey’s Crossing was "for all intents and purposes" Dreamfall, and concerned a 17 year-old Shifter called Zoë Alvarez who studied nanotechnology and lived with her father. It took place 10 years after TLJ and would revolve around her search for April. One or two differences (this younger Zoe was spoiled and lived in the privileged gated-community of Summertown in rural England) were ironed-out around the time Dag Scheve came on board as Ragnar's co-writer in the Spring of 2003. "Interestingly enough, in those early drafts, Zoë was quite geeky and something of an 'accidental magician': strange things had a tendency to happen around her, something that was supposed to be reflected in the gameplay." In fact, this was to make up part of a gameplay mechanism involving her learning of magic spells over the course of the game. "This mechanism was, for a variety of reasons, cut relatively early on, though the essence of it lingers: Zoë has powers that have not been explained. Yet."

From the 24th of May 2003, Ragnar referred to the game as Static / The Longest Journey, but often simply referred to it as TLJ: The Next. "The Static was actually the name of a story based action-adventure game I designed back in the mid-90s - a game that explored the boundaries between reality and fantasy, inspired by the works of Philip K. Dick, and which I feel is conceptually close to the movie The Matrix." On the 18th of February 2004, however, its title was finally announced as Dreamfall.

To maintain a narrative and thematic integrity to the story of Dreamfall, Ragnar and Dag designed what they refer to as the "Faith Model". This meant that there were several options for characters to be influenced by their faith in various things. Obviously Faith had its most clear representation in the character of Faith herself, but all the major character developed along different routes. "Zoë never went to hopelessness, but she reached disillusionment. But through the act of destroying Faith, she regained faith. Kian also went to disillusionment, to a sort of spiritual death, and then transformation – he skipped hopelessness. While April just fell down."

Dreamfall was to pick up where many of TLJ's threads were left; relating the stories of its characters:

"Several other returning characters were actually cut from Dreamfall as time went on, however, including Abnaxus - who had been left in a very bewildered and tragic state following the events of TLJ - and Ben Bandu (ditto: Dreamfall was always a darker and more tragic story, and there were few happy endings). The reason for cutting these characters was simply that there were already too many stories to tell, and their tales were better left for another game - although they remain important. 3D models and animations were even created for these characters, which goes to show that these decisions are often made at a later stage."

Changes from The Longest JourneyEdit

One change from TLJ which Ragnar wanted to make was in response to criticisms the dialogues in that game were too long (they stretched its play-time up to 50 hours in some people's experieces). "By shortening the playing time - and by "shortening", we don't mean "short"; we're still talking maybe twenty hours of gameplay - we can put a lot more effort into what's on the screen." Puzzles were also simplified. These changes were to upset many fans, although perhaps not so much as the inclusion of action elements.

Ragnar was misquoted as describing the genre as "action adventure", although he later sought to clarify this as "adventure action". This idea of Dreamfall as having the elements of a "thriller" was part of a push to update adventure games for new audiences. Action was often difficult to implement, however, and certain aspects needed significant re-thinking over the development cycle. Originally, camera movement was completely scripted, although they later decided on a more conventional, player-controlled experience. The combat was also given a last-minute overhaul, after criticism during showing at a games expo.

Originally slated for release in mid 2005, the release date for Dreamfall slipped to the second quarter of 2006. Even still, some things were cut from the game to get it out on time, such as the role of Kian. "We had to cut some stuff with him, simply because we didn’t have time. I wish we’d had the opportunity to have his sacrifices and changes last longer. If we ever did a director’s cut, I would definitely put back in the things I had written and we had planned to do with him."

After launch, Ragnar wrapped up Dreamfall with an extensive analysis of the game he called 'Dreamfallen'. The "post-mortem" was originally planned in five parts. The first was a round-up of criticisms levelled at the game, while in the second Ragnar discussed the origins of Dreamfall. In a planned third he was to describe the actual development process ("the ups and downs and pitfalls of using new technology and doing PC and console cross-development"), while the fourth was to provide a response to criticisms of the game. The fifth was to be a discussion of the future of Dreamfall and the TLJ universe.

As only the first two installments were published, the Rock, Paper, Shotgun interview has served as a final post-mortem of sorts.

Add a photo to this gallery

Retrieved from "https://tlj.fandom.com/wiki/Dreamfall?oldid=13399"
Community content is available under CC-BY-SA unless otherwise noted.