"The Draic Kin, having lived among us for untold generations, rose to offer their guidance and assistance in preserving the Balance of our world... Draic Kin, Drachen, Dragons - whichever name they go by, they remain the eternal servants and custodians of the Balance." - Vestrum Tobias

The Draic Kin are four beings who came to Earth many thousands of years ago. They were instrumental in creating the Balance when the Earth was threatened by Chaos, and they brought the Stone Disk ("forged in the fire of their world") that eventually became the key to the Guardian's Tower. Each Kin bears a 'Dragon's Eye' jewel that forms part of the Stone Disk: part of April's task is to recover those jewels.

The Kin can appear in the form of great dragons - this appears to be their native form - speak a sibilant language amongst themselves, and have the ability to wield powerful magic.

Discovering more about the Kin forms a key part of April's journey. She learns that two of the Kin dwell in Stark, two in Arcadia; this may be connected to maintaining the Balance. It is uncertain if they are able to Shift between worlds, but Cortez is able to keep track of events in Arcadia because "voices" whisper in his ear. He also tells April that he knew Vestrum Tobias when he was just an Istrum. Jacob McAllen also seems able to command forces over the Divide, but this may have something to do with his army of Warrior Shifters. 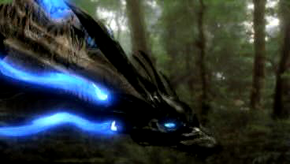 The Kin are capable of living for many thousands of years. The most senior of the Kin appears to be the Old God, who also brought the common ancestor of the Maerum and the Alatien to Earth. The Mother, also known as the White Kin, also seems to be senior, but as she tells April, 'The Mother is eternal, but I am not.' She seems to live on through her children.

As is dramatically demonstrated on the roof of the MTI building, the Kin also have the ability to take human form, and they are by no means always amicable. Shedding their disguises of Jacob McAllen and Cortez, the Green and Red Kin respectively, the two - who address each other as 'brother' - do battle and then plunge from the roof. It is not certain whether the battle had a victor, but April says the pocket watch stopped ticking when Cortez fell from view. However, she does speculate whether a fall like that could kill a dragon. It should be remembered that when Brian Westhouse gave the pocket watch to April it needed to be wound by her, as it had stopped ticking some time ago.

Because it is revealed that she is the daughter of the Mother, April is technically a member of the Draic Kin, but in her conversation with the white of the Draic-kin during the events of Dreamfall, the white of the Driac-kin states that April is not a dragon but that they are "sisters by dreams" . McAllen seemed to have considered her beneath him, though whether this is because she was raised in a human family, or for some other reason, this is unclear, though it may possibly have something to do with April's father, whose identity is unknown.

A passage from Scriptures of the Balance (XI) implies that the Kin are something on a par with the Creator and the All, as well as saying they were "Born of the emptiness between the Stars". April learns much about them in the Enclave's book Secrets of the Draic Kin.

"It's been troubling me for so long. Are you saying that I'm a dragon?" - April
"There were only four. And now there's only one." - The White Dragon reborn

In Dreamfall, there has been a grim development - something is hunting the Kin, an enemy the reborn White Dragon describes as 'not mortal'. According to her, the Old God has now gone silent, and the White Dragon is now the only one of the Kin left; the others have "ceased to be". When April asks what is hunting the Kin, the dragon replies "shadows and ghosts" - she claims "it wants to eat me up".

Interestingly, when April asks why this enemy would want to hunt the Kin, the White Dragon responds "So that there's nothing left to challenge it. So that it can run free amongst mortals. So that it can devour, undisturbed." This implies that the Draic Kin acted as protectors and guardians of humanity and the other races in Stark and Arcadia, a role that fits with their assistance in creating the Balance. Whatever this enemy is, clearly the Draic Kin were the only beings who could have challenged it, and now they are gone, it is free to act. Many fans have speculated that this enemy is in fact the Undreaming.

However, in The Longest Journey, the Wood Spirit said the Mother had been fighting 'black Chaos', and the fact she eventually died as a result implies it was a battle that had been going on for some time. Therefore, the Kin have had at least one enemy before now. There is no explanation as to why the Chaos Vortex attacked the Mother, though it is possible the Vortex was trying to destroy her egg.

Retrieved from "https://tlj.fandom.com/wiki/Draic_Kin?oldid=13614"
Community content is available under CC-BY-SA unless otherwise noted.