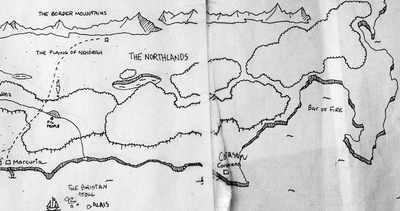 Land to the east of Ayrede in the Northlands, Corasan is ruled by a Khalef. It is almost as antagonistic to Ayrede as Tyren in the west (Vestrum Tobias refers to it as the "gaintbeast" to Tyren's "snapjaw" regarding Marcuria), although it seems they are not quite so bellicose as the trolls (perhaps more a political than military antagonism). It is buffered from Ayrede by Riverwood.

Its ships' captains are not as sexist as those of Marcuria and, when April meets her, the Dolmari navigator Tun Luiec is planning a voyage east to seek work there. Q'aman, who was the World's Strongest Man in the circa at Corasan, once performed to an audience of the Khalef and his son, before he was forced to flee when the son was injured after a great stone was shattered by the giant..

Its real-world counterpart's name, Khorasan in central Asia, is Persian for 'east'.

Corasan warrants two brief mentions in Dreamfall: both in connection with the Rebels. April tells Benrime that the Rebels in Bunnvik can no longer travel to the city of Corasan, as the Azadi are too numerous there. This must be a neighbouring town, but also tells us that the Azadi are even this far east. The second reference is in Na'ane's tale of escaping Marcuria. She says she stowed away on a tradeship to Corasan, then shared the back of a Zhid's leapfur north to the Swamp City "along the old paths".

The only other means of accessing the Swamp City is by the Captain's route over water: "the rivers and swamps" that lead there from the Bay of Fire. Unless this is a rather circumspect route limited by the need to transport goods and personnel by boat and the constraints of geography - i.e. the only waterways north branch that way from the Bay of Fire far to the east of the city of Corasan - we must reconsider Corasan's relationship to the Bay of Fire, and the possibility that the Bay of Fire is Corasan's port. This seems to contradict something Q'aman said in TLJ, however: while performing in the Circa at Corasan, people came to see him from all over the Northlands. "Some, even, from east of the Bay of Fire." While Q'aman is indeed somewhat simple, it is unlikely that he considers that someone coming from beyond the bounds of a single city to be particularly noteworthy.

This specification of Corasan as a city contrasts with its depiction in TLJ as a nation. There may be two reasons for this. Firstly, that both are true, and that Corasan is the capital city of Corasan the state. This solution is problematised by the reference in DF to the Azadi negotiating with Corescent for peace, something more appropriate for a state to do than a city. It is possible that both are cities in the state of Corasan, and that Corescent has become more important in the last 10 years, or that it is a seasonal residence for the Khalef. Alternatively, Ragnar may have confused the two locations while developing DF.

Retrieved from "https://tlj.fandom.com/wiki/Corasan?oldid=14065"
Community content is available under CC-BY-SA unless otherwise noted.