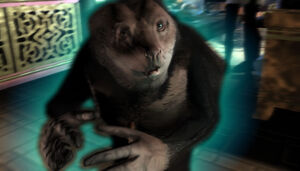 One of the four magical races entrusted with a piece of the Stone Disk, the Banda are a small, mild-mannered people who live below the ground in Riverwood. Standing about half the height of a human, with a small snout and large eyes, they are sometimes disparagingly called 'mole-people', because of their affinity with the earth. Although they are equipped with strong arms and hands for digging, the Banda actually use magic to create their tunnels; they sing to the earth to shape it.

The Banda are a social people with a strong tribal family structure, and extraordinarily long names. They are led by an Elder who also seems to be their spiritual leader; he has the last word in matters that concern the tribe, and decides who can sleep in the Spirit Dig. This honour is extended to April Ryan, who experiences a Bak-Baar during the night.

Generally, the Banda seem to be quite timid, but friendly. The first Banda April meets is Ben-Bandu, who is looking for his brother, Bandu-Uta. April promises to help, and saves Bandu-Uta from being eaten by the Gribbler. This earns her the respect of the tribe and, after her Bak-Baar, a new name bestowed by the Banda Spirits: 'April Bandu-Embata', meaning 'the little one who seeks and finds'.

If April chooses to work overtime at the Fringe Cafe in the early chapters, a Banda playing a pipe appears from the jukebox during the evening. 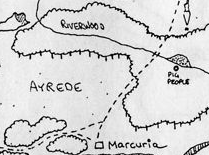 It appears the Banda were not always meant to be 'mole people': on a map of Arcadia drawn by Ragnar in 1996/7, the Banda village is marked on the map the place of the "pig people".

The original TLJ site had this introduction to the Banda people (although the text called them by the derogatory term "Mole People".)

"Who are you? Where did you come from? We do not get visitors very often, human, and when we do, it is rarely an occasion to be celebrated. Why do your people look so unkindly to us? We wish only to live in peace with the Earth, to worship Her, to dig our tunnels and sing our songs. We hurt no one. Please, leave us be.

"You are still here, human? Then stay, because we are not unkind to strangers, whomever they may be. As long as you do not bring strife into our tunnels, as long as you do not disturb our songs; stay. Sit by the fire, eat our evening meal with us, and let us tell you stories of our people, and of our customs. But do not stay out here in the dark, for these woods are not safe. We have lost many of our own since this past winter. Shadows fall on our forest, both from within and from without. Dark times are coming, and we have only our fires and our tunnels to protect us. Perhaps you can help? You are human, are you not? The prophecies speak of a human female to turn the tides of chaos before it is too late…

"Ah, the prophecies -- you wish to learn of them? Then I will recount them to you, word by word, as shaped in the Soil by the songs of my ancestors. Listen, for these words are of the Earth, and they are sacred.

"Long ago, our people came to the Earth beneath these trees, and we were happy, because we knew this was our Dig. To the Soil we sung songs of shaping, and the Soil moved and moulded itself to our wishes. It gave us tunnels to move through, and holes to sleep in, and caves where our children could hide when danger was abroad. Our ancestral Elders carried with them a stone, given to them by the Fathers, and this they kept well protected, for they had been told the significance of the stone, and its purpose. In the time of Chaos, this stone would be brought back to the Fathers by a human female. She would prove herself by committing an act of selfless sacrifice for one of our own. And she would come in the hour of our greatest need to destroy the shadow that threatened our village.

"These are the prophecies, visitor, and the times described are at hand. Do you know the human we speak of? Are you the harbinger of salvation? Please -- we have lost more of our own these past few days, and the children weep themselves to sleep in fear. Please, human; chaos comes, and we are in great peril."

The Banda play a less central role in the story of Dreamfall. When April describes the Grubbers humming tunes to open pathways through stone, Na'ane observes that it "sounds like Banda magic", referring to their singing to shape the soil.

Zoë and Kian also witness a Banda in the Old Town market. The character model for this is called "Ben_Bandu", which may refer to the fact that he was originally intended to play a role in Dreamfall. Ben-Bandu is also pointed out in a concept painting of the Northlands forest.

The Mole, the Banda head of a "criminal underground," was announced in June 2013 as a character in the game. It is revealed that all she is the last of her species, as all other Bandas were killed in a genocide by the Azadi.

Inspiration for the name 'Banda' probably comes from the city of Banda Aceh, capital of Aceh on Sumatra in Indonesia. In Javanese banda means 'wealth, worldly goods'. Indeed, during the feast held in April's honour people speaking Bahasa Indonesian can be heard in the background. Apparently they are discussing food. Phrases include: Bagi rokok - "Got any cigarettes?"; Ke Surabaya - "go to Surabaya [a City in East Java]"; Ayo makan, makan - "Let's eat!"; He he bisa aja - "Aw, come on, don't tease me"; Wah sialan - "Aw, crap".

But there is also a the rather plain connection to ital. banda, the name for a mobile concert band which consists of woodwinds, brass instruments and a drum, refering to the fact, that the Banda are so deeply connected to music.

Retrieved from "https://tlj.fandom.com/wiki/Banda?oldid=13475"
Community content is available under CC-BY-SA unless otherwise noted.