"Walking around out there, seeing with my own two eyes things that can't possibly exist... I kept thinking, it's all a dream. I'll wake up at any moment now and everything will return to normal. But then I realized, I'm still here. It's real. I can touch it, and I can smell it..." - April 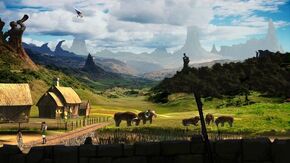 Arcadia is the magical half of the twin worlds. From what we've seen of it, Arcadia is a fragmented and changeable place, with a multitude of magical and non-magical races, possibly due to the greater risk of Chaos inherent in magic.

Arcadia has four continents, separated by the Great Ocean: the Northlands, the Southlands, and the Far West. Whether the fourth is an eastern continent or refers to the lands Brian Westhouse describes south of the Southlands is unknown.

April's journey in Arcadia begins in the Northlands' capital, Marcuria. She later travels beyond its boundaries into the rural Northlands, into Riverwood and the burrows of the Banda, to the eerie castle of alchemist Roper Klacks and back to Marcuria. Her travels later take her on a sea journey to the island of Alais and to the depths of the ocean beyond.

Unlike structured Stark, Arcadia (as far as TLJ shows us) has no great differences in social strata. There is a common language in Arcadia - Na'ven - which helps to unify the people.

In Arcadia, iron is highly prized and more valuable than gold (April unsuccessfully tries to pay for a game of cups with her gold ring). Also, technology does not function well there due to Arcadia's occasionally chaotic nature. Consequently, Arcadia is low-tech and fairly feudal/medieval. Several of its inhabitants complain that Arcadia is backward. There is some law and structure, enough for cities to have established and elected officials, but many areas of Arcadia are dangerous and some figures, like powerful Alchemists and monsters such as the Gribbler, can act with impunity.

Magic is an integral part of society. Seers, Alchemists and magic talismans aren't given a second glance. Indeed, many of the races of Arcadia need magic to exist.

There are traces of Stark in Arcadia: Brian Westhouse, a man from 1930s Stark has a house on the fringe of Marcuria, and the Cups Handler owns a calculator for some reason. Also, several characters are aware of Stark; the reverse of which cannot be said of as many characters in Stark, though as the Balance starts to fail, dreams and visions from Arcadia begin slipping through.

There are a multitude of different races in Arcadia. Marcuria was founded by humans, so they are in the majority there; but the city is also home to many Dolmari, as well as the Venar ambassador Abnaxus. April also encounters Banda outside the city walls, the Maerum and Alatien around the island of Alais, the Orlowol and the Stickmen in the island jungle, and the mysterious seafaring Dark People. A neighbouring nation of aggressors, the Tyren, are also poised to invade Marcuria.

By and large the races co-exist peacefully, though some humans - like Karek the map seller - are disdainful of the Dolmari, and the Banda are sometimes unkindly referred to as 'molemen'.

Many species in Arcadia mirror their counterparts in Stark. For example, there are elephants (known as Kan'dar and exaggerated by Karek into the 'horror of the Southlands') and sharks, though they apparently evolved into the larger and more dangerous creatures known as the Snapjaw. But there are also species unique to Arcadia, like the Elgwan and Sikhatis, and the mudhoppers that Vestrum Tobias Grensret prizes so highly. There are also talking animals like Crow.

People in Arcadia are aware of the history of the Balance and the role of the Guardian, even celebrating the Festival of the Balance in thanksgiving. The Sentinel are a known and respected presence in Marcuria, having their magnificent Temple there, but the teachings of the Vanguard are beginning to find more and more adherents. However, there are some splinter religions, like the worship of the Mo'Jaal in Ge'en, but these seem to be more about making money than an individual's faith.

The races also have their distinct beliefs. The Banda engage in a form of ancestor worship; the Alatien also believe that their deceased Tellers watch over them. Both the Maerum and the Dark People venerate the Ancient Blue - the Maerum worship him as a god while the Dark People serve as his messengers. The other Draic Kin, if not actually worshipped, are held in high esteem though they are rarely seen.

Though there has been stability in the Northlands for many years, the approaching invasion of the Tyren, the whispers from the Vanguard and the weakening of the Balance have taken their toll; as April leaves Arcadia, people there are facing great upheaval.

"Wait, April told you that she'd seen another dimension?" - Zoë
"Not seen. Been to. A place called 'Arcadia'... And I believe she's still there." - Emma

Zoë Castillo's travels in Arcadia also begin in Marcuria - or, rather, under it. When she emerges from the Underground Caverns, we get a sense of how Arcadia has changed in ten years.

We are now aware that to the very far west is the Azadi Empire, which has at least two major cities (Sadir and Tahran). From Brian Westhouse, we learn that further south of Altaban and Monterba are the Southern Capes and the South Sea, and beyond them an icy land which is frozen all year round. Somewhere in the ocean is the Dark People's City with their famous library within, and the Rebels have a secret hideout between Marcuria and Corasan. There is also more insight into the country of Irhad, as Na'ane is a native.

Marcuria is the only location in Arcadia that we visit in great depth, and it has changed greatly: after the Tyren were driven out by the Azadi, these 'trueborn' gradually became a fixture in the city, imposing their views and beliefs on the populace. They have even gone so far as to 'approve' various books as suitable, and ban others. Their fanaticism, uneven generosity and attention to detail has meant greater profit and freedom for those deemed respectable by the Azadi... and problems for those who are not, namely any 'Magicals'.

This has resulted in a distinct economic downturn in Marcuria for some, and the social pyramid is now clearly defined with Azadi and other humans at the top, and the magical races at the bottom. (Also, although Captain Horatio Nebevay scorned women in the original TLJ, it is unlikely he would get away with it now, as the Azadi culture holds women in high esteem.)

Gold also now seems to be a valid currency, and iron appears to be in the same role it has in Stark. The Azadi have also introduced their steam-based technology, which many Marcurians have embraced eagerly. This includes Cloudships, which have increased travel across Arcadia. Practising magic, on the other hand, has become an arrestable offence, though the Azadi do reluctantly use thaumaturgists from time to time.

We encounter several new races in Dreamfall, including the feline Zhid and the Samare. Many of them, along with the familiar Banda and Dolmari, are now essentially trapped in Oldtown, the 'Magic Ghetto', their homes subject to raids at the whim of the Azadi.

The Sentinel have been ostracised and driven out by the Azadi; there is no mention of the Vanguard. Though some die-hards still swear by the Balance or the Mo'Jaal, they will watch what they say in public and most now declare their devotion to the Azadi empresses, the Six, or to the Goddess whom the Azadi ardently worship. The Temple of the Balance has also been levelled, and presumably the Enclave as well, replaced by an enormous white Tower. The Dark People also make no mention of their service to the Old God.

Ragnar has claimed - not entirely seriously, it should be noted - that Arcadians reproduce asexually.[1] This should not be taken to mean, however, that they do not indulge in sexual acts. Apparently there is something called "fissing", which we will comment no further on.[2]

Retrieved from "https://tlj.fandom.com/wiki/Arcadia?oldid=13828"
Community content is available under CC-BY-SA unless otherwise noted.